We call for major changes to police and prosecutor work practices. Read our 'The Decriminalisation of Rape' report.

Today (31 May) the Information Commissioner has released a report and opinion following an inquiry into the processing of victims’ personal data in rape and serious sexual offence investigations.

Third-party data requests have long been an issue for victims and survivors, with the police and CPS often requesting access to excessive amounts of data at the investigative stages. The ICO’s report highlights multiple examples where police and the CPS have asked for personal data far beyond the scope of the investigation, leaving victims and survivors feeling as if they are the ones on trial.

The report details that not only is there insufficient understanding from the police and CPS on how to request and manage personal data in a way that respects survivor’s rights to privacy, but also that the level of information requested is excessive, discriminative and in some cases, unlawful.

Furthermore, victims and survivors are being coerced into consenting to use of their personal data with the threat that if they do not give access to it, it will negatively impact their case. Rather than specifying data that is relevant to the case, police are taking shortcuts – asking for blanket consent to everything and then picking and choosing what might be relevant. This goes beyond a lack of understanding, it is an outright disregard for victim welfare in favour of an easier investigative route.

The impact this has on victims and survivors is immense, with many describing being in the criminal justice system as more traumatising than the assault itself.

We therefore fully welcome the Commissioner’s Opinion, recommendations and most importantly, the assurance that the ICO will take enforcement action if practices do not reach the standards outlined by the Commissioner.

The removal of ‘Stafford statements’ will help to ensure victims and survivors aren’t being asked to give up more personal data than is necessary, whilst the push for a more standardised approach to data collection across police forces nationally will give officers a better understanding of appropriate and acceptable practices.

Calling on Chief Constables to take ownership of data protection policies adds a needed and welcome level of accountability.

"The police and CPS often request and at times, demand unreasonable and excessive amounts of personal data from rape victims and survivors, infringing on their privacy rights and causing additional emotional distress.

The Commissioner’s recommendations have the potential to drastically improve the experiences of victims and survivors going through the criminal justice process. These changes could support the police and CPS to prioritise victims’ rights and ensure they have a voice.

The ICO report has come at a crucial time and shows that the current approach to personal data collection is part of the culture in the criminal justice system that is harming victims and survivors. Now is the time for radical and immediate change: victims and survivors deserve to be treated with dignity and respect. It’s particularly important that the ICO can take action to enforce these recommendations and make sure that victims and survivors see a change in their day to day experiences of engaging with the police and CPS over disclosure of their personal data". 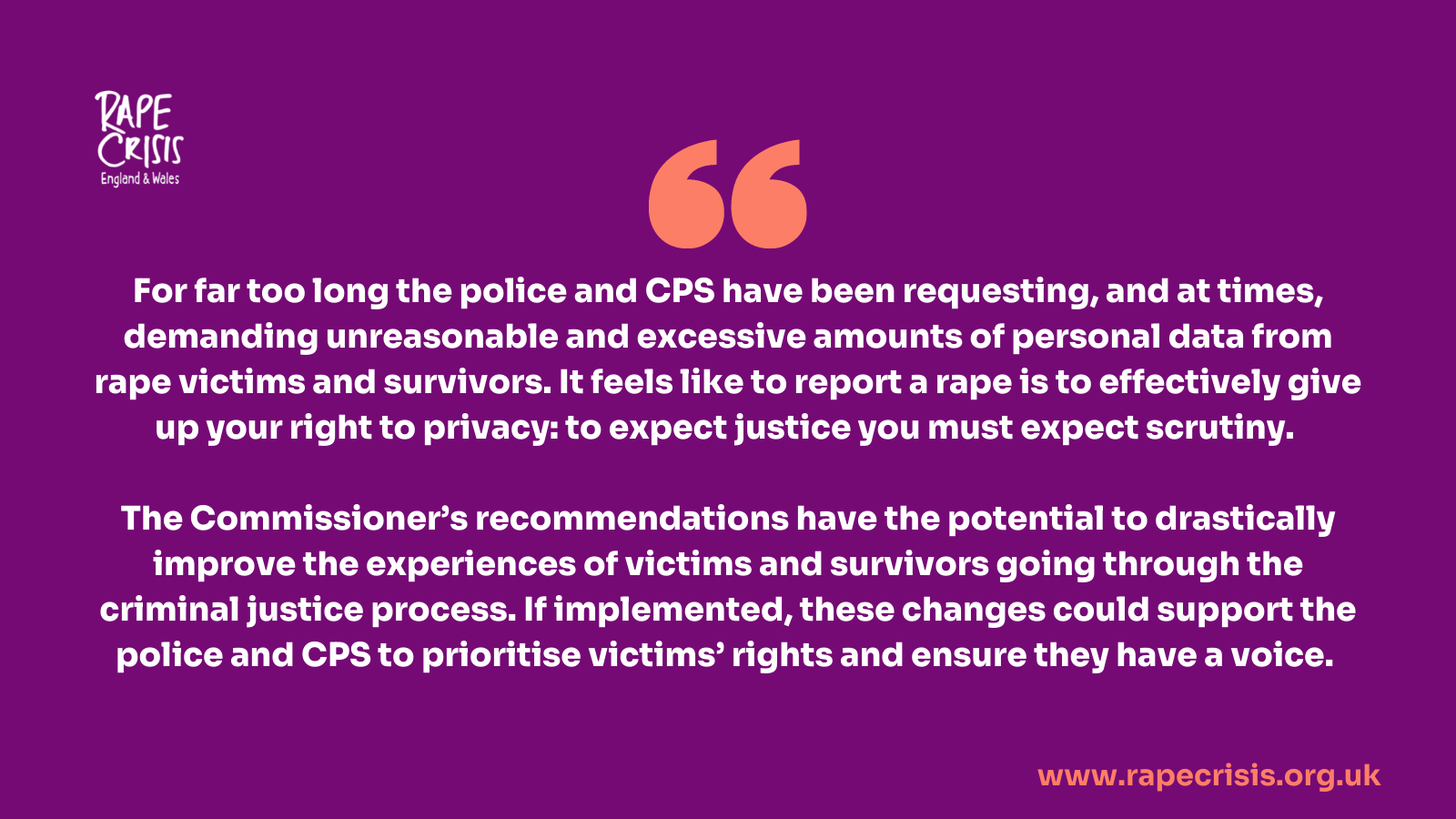