Over 22,000 UK women told VictimFocus about their experiences of violence and abuse for a report released today (30 April 2021), "I thought it was just a part of life": Understanding the Scale of Violence Committed Against Women on the UK Since Birth.

The new study reveals that 99.3% of the UK women who took part had been subjected to one or more acts of sexual violence since birth.

"This significant piece of research and its stark findings demonstrate clearly what those of us in the specialist violence against women and girls (VAWG) sector have known and said for nearly five decades: that sexual violence and abuse, and all forms of VAWG, are far more prevalent and widespread than most people realise.

The report also highlights once again just how normalised violence against women and girls still is in the UK.

We cannot tolerate this scale of violence and misogyny any longer. Its impacts are severe, wide-ranging and long-term not just for individual victims and survivors but for their friends, families, communities and society as a whole - this is not just a 'women's problem.'

We hope these findings act as a wake-up call and rallying cry for those who need it. We need urgent, radical and holistic action and investment to address VAWG now." 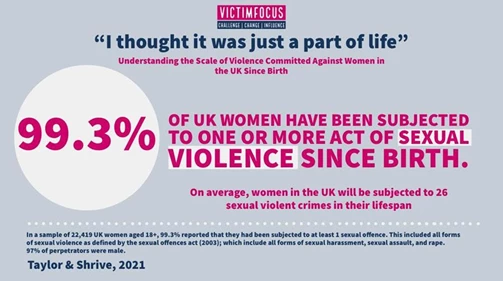